The city of Faro 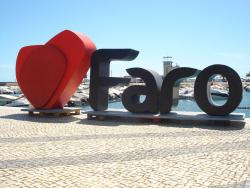 Faro (Portuguese pronunciation: “fah-roo”) is the administrative centre for the whole of the Algarve region with a population of approximately 55,000 inhabitants spread over 210 km2, of which 30% are integrated in the Ria Formosa Nature Reserve.

The city of Faro is bordered to the south by the Ria Formosa lagoon, a 19 km long system of barrier islands that communicates with the sea through six inlets, five of which are natural and have mobility characteristics, and one is an artificial inlet that was opened with the purpose of allowing easier access to the port of Faro. This system forms three main islands, which can be reached by boat, and are excellent places to enjoy pleasant days in contact with nature, enjoying boating, biking or walking.

The local cuisine, typically Mediterranean, the white sand beaches and balmy waters awarded with the “blue flag”, in some places inhabited only by migratory birds, are aspects to discover on the islands of the Ria Formosa, with a high potential for nature tourism.

As an ancient city, Faro is to be (re) discovered. From pre-Roman origin, known at that time as Ossónoba, Faro was one of the most important urban centres of the southern peninsula.

The city has both Arab and Roman ruins but most of the present attractive older buildings were constructed after the disastrous earthquake of 1755. Particularly attractive is the old part of the city surrounded still by the Moors walls, which date back to the 9th century.

Currently, due to its central role and as the regional capital, Faro has significant infrastructures and public services in the region. The airport handles more than five million passengers a year, the University is internationally known in the fields of marine sciences, tourism management, biotechnology and arts apart from the Central Hospital and six secondary schools, all showing the central role of Faro in the whole region.

The city also has an attractive marina, well-maintained parks and plazas and an old town full of outdoor cafés and pedestrian lanes. Besides its museums and beautiful churches and chapels, Faro also boasts a vibrant nightlife.

To discover the city and its essence, a walk through the streets of Faro is recommended.

The garden Jardim Manuel Bívar, an ex-libris of the city, is a mandatory passage point for anyone wishing to know the city, with a pleasant sidewalk and several esplanades where you can enjoy the mild climate of the Region. The garden is surrounded by a remarkable set of buildings with emphasis on the building of the Banco de Portugal (the National Bank), the Igreja da Misericórdia (Church of Mercy), the former Hospital da Misericórdia (Mercy Hospital) and the Arco da Vila (the Arch of the village), the main entrance to Vila Adentro, the administrative and ecclesiastic centre of Faro. It is here that the main cultural events occur in the county, especially in summer.

The Rua de Santo António is the main pedestrian street and the best choice for shopping for traditional handicraft, and to taste the traditional regional sweets, as well as a wide variety of fashion shops, perfume and cosmetic shops, all within a very comfortable walking distance.

This is the primitive nucleus of the city of Faro, formerly called Ossónoba and fully enclosed by walls. The oldest building in the city, the Igreja da Sé (the Cathedral) is located here, built in 1251, with its marvellous altarpieces and the impressive 18th century organ with chinoiserie motifs. From its bell tower, you can enjoy a breath-taking view over the city and the Ria Formosa. Adjacent to the building is the Capela dos Ossos (Chapel of Bones).

The Paço Episcopal and the Seminário Episcopal, respectively the residence and place of training for the Clergy, surround the stately Largo da Sé. Their “scissor roofs” (shaped like open scissors) and whitewashed façades, associated with the orange trees that adorn the public space, transport us to the urban landscapes of a Mediterranean paradise.

By walking through the irregular streets of Vila Adentro you will find the Faro Municipal Museum in the old convent of Nossa Senhora da Assunção (Lady of Assumption), one of the first examples of a type of Portuguese protoRenaissance cloisters. Right in the centre of Vila Adentro is the Câmara Municipal de Faro building (the City Hall), housing the administrative power of the city.

Faro has a diversified architectural heritage with a natural backdrop for providing excellence, and the necessary requirements for the practice of nautical tourism and for nature-lovers. The unique characteristics of the Ria Formosa, one of the national Seven Wonders, allow for the practice of several activities, such as kite-surfing, canoeing, windsurfing, rowing, boating and bird-watching, granting the visitor unique moments in contact with nature.

The municipality of Faro promotes a number of initiatives and events throughout the year, thus providing pleasant leisure moments. Summer is undeniably the period with most activities on offer, ranging from thematic fairs, concerts, sports activities, shows, and festivals to other initiatives.